Phoenix Job Corps Students Give Back!

Phoenix Job Corps Students Give Back!

Phoenix Job Corps students have been volunteering at a downtown Phoenix church, welcoming refugees seeking asylum. Students set up tables and welcome the 50 refugees as they get off the bus. 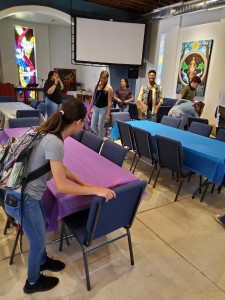 “We accept asylum seekers,” said volunteer Bonnie Simmons, coordinator of the church’s asylum work as well as mercy and justice work. “It’s the last leg of their journey. They’ve just been released legally from ICE custody. And they are here to get transportation. Instead of having them dropped off at a bus station or a random street corner in Phoenix, we have them come here where they’re fed, showered, and given clothing. We help them make their travel arrangements.”

Most stay at the church about 24 hours. In order to have legal asylum seeking status, they must have a person in the U.S. who’s their sponsor. ICE has made contact with that person so everyone must have a place they will be going.

“Once their travel arrangements are made we escort them to the bus station or the airport and make sure they get on their next leg of their journey and make it to their final destination,” said Simmons.

Since the beginning of January, she estimates the church has probably helped up to 1,500 people.

Upon arrival, Job Corps students along with other volunteers serve the refugees coffee, cereal and fruit. Later, the refugees are given a hot meal, usually a bowl of soup, then a catered lunch, dinner and breakfast the next morning.