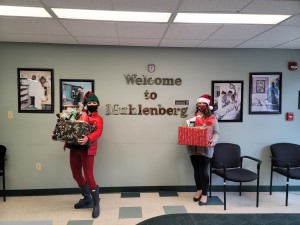 Every year Muhlenberg Job Corps Center honors its staff with a huge Holiday celebration. As the planning committee met virtually the last couple of  months it became increasingly apparent that traditions as we knew them were not going to be feasible in the midst of the COVID 19 Pandemic. After much discussion the final week before Christmas a decision was reached on how to insure staff received their gifts while remaining safe and going by social distance guidelines. With the extension of a partial telework schedule whatever was done had to be extended to both Dec. 17th-Dec. 18th so all staff could participate. Individual staff gift bags were created containing a monetary gift, embroidered beanie, and candy while service award recipients received a couple of extra special custom gifts, which were also added to the bags. On the designated days as shown in the picture items were boxed and dropped outside each staff members office door so social distance was maintained for everyone. Staff were also encouraged to dress in ugly Christmas attire and their pictures were taken at gift drop to be entered into a  virtual contest. Staff were very appreciative of the efforts made to recognize the hard work put in throughout this very difficult year.