During the month of June, Charleston Job Corps’ Joni Pena, Leisure Time Learning Coordinator, allowed students the opportunity to share their artistic talents .    Pena, spearheaded an art competition of which the theme was “Self Portraits”.
A total of 13 students participated in the art competition.  However, of the 13 participants, only six(6) entries were entered into the finals.  The participants are as follows:   Tristen Rogers, Tyeana Smith, Isaiah Young, Lahmear Hampton, Alexis Henderson,  and Christian Hudson
The contest was judged by one of our Academic Instructors, Ms. Kathleen Jordyn and Student Government Association Coordinator,  Donovan Grooms.
The winners and their portraits were as follows:
First place – Lahmear Hampton 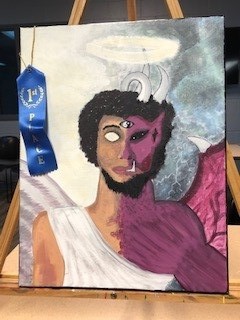